The Life and Legacy of Sister Marie Celeste 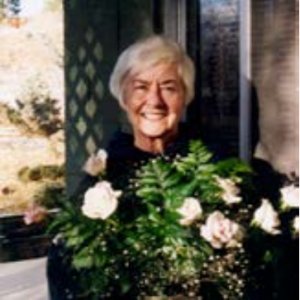 Sister Marie Celeste died in great peace in her room at Carmel on September 26, 2005.

Marie Celeste Fadden was born in Philadelphia, Pa. on January 10, 1924 and lived in a suburb of that city, Ridley Park, Pennsylvania until her entrance into the Carmel of Morristown New Jersey in 1951.

In 1942 she was awarded a scholarship to the Pennsylvania Academy of the Fine Arts. During her years at Art School, she established her own studio in the city, became a teacher in the School Art League, tried out for all Juried Shows that were announced, and was accepted in all of them. In her third year at the Academy she was awarded a Cresson Travel Scholarship for study in Europe, and won it, although she could not use it for several years as the Second World War prevented student travel. Meanwhile she studied at the Barnes Foundation.

As travel resumed she made her way to Europe and to an experience which influenced both her art and the rest of her life:(from her Journal) “I entered Assisi a happy worldly and light-hearted artist-three days later I left the town a sober, converted (if you will) pilgrim, determined to give up art and become a nun. Try as I might to reverse the effects of that experience, I never could.”

On her return from Europe she put up a small exhibit of her work from Europe, and attended one more year at the Academy. In the summer of 1950 the Metropolitan Museum of New York announced its first Juried Show. She submitted a nearly life size portrait of a “Little Sister Of the Poor”. The two works from Pennsylvania accepted for the Exhibit were hers and Andrew Wyeth’s.

She began corresponding with the Carmel of Morristown, N.J. the same year and began her religious life there on July 26, 1951. It was her intention at the time to leave art behind but fortunately for all of us she was slowly allowed to do minor works again as long as they fit into the monastic schedule and a tiny six by nine room. When the Vatican Council began in 1963 she seriously heeded the call to renewal and when she became Prioress led the effort to rethink contemplative life in a modern age. Her years in Reno began as substitute editor of the Carmelite magazine Encounter.

See a Gallery of Her Art Below 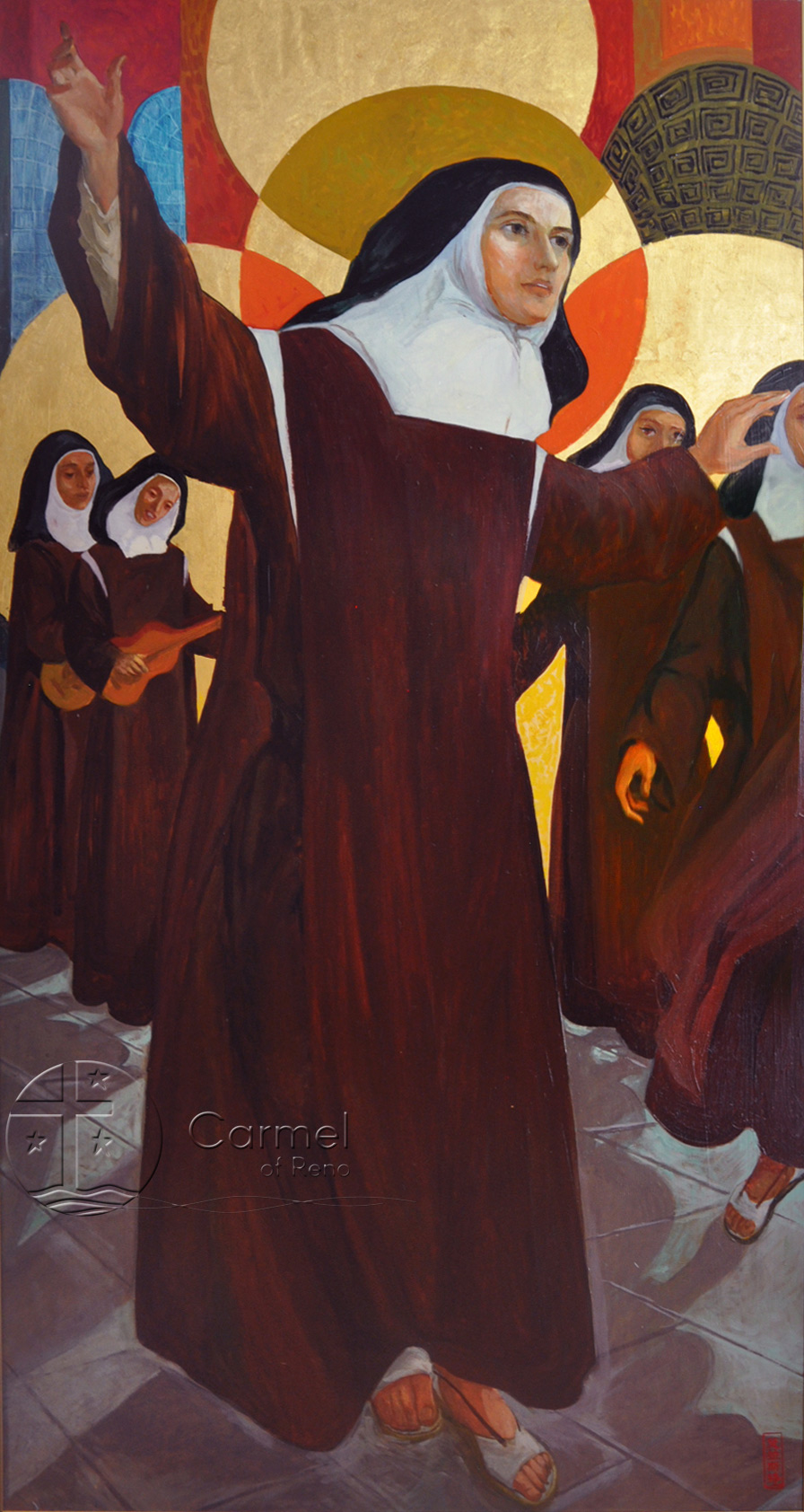 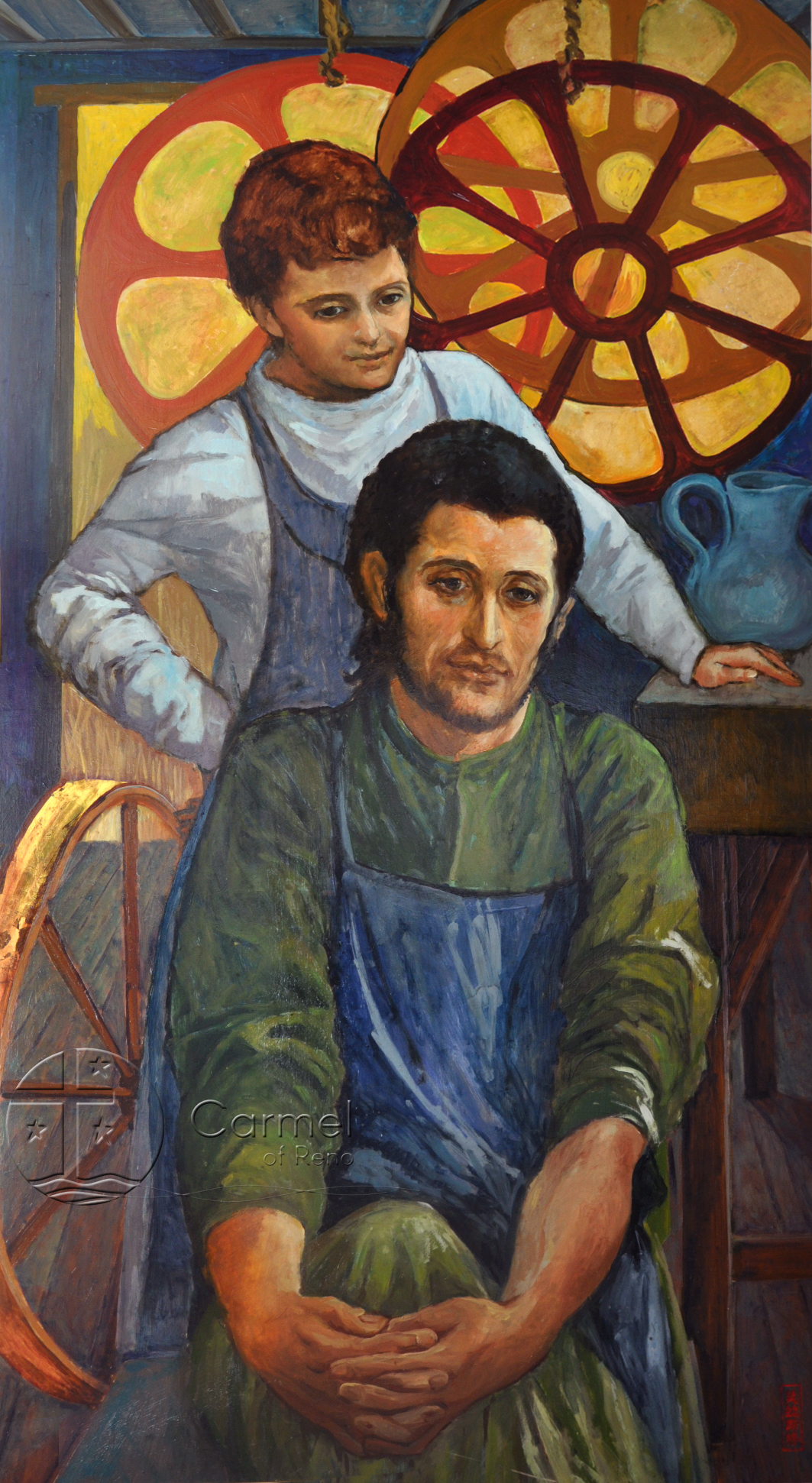 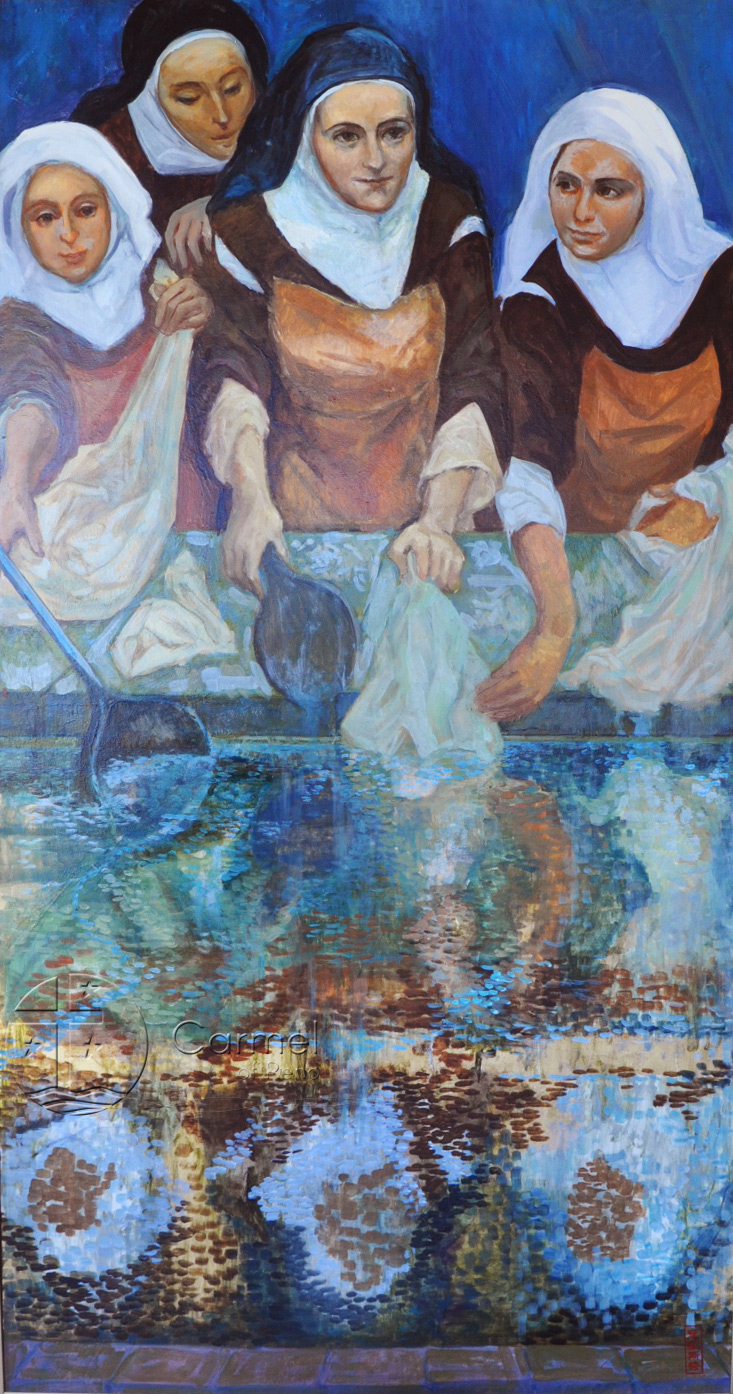 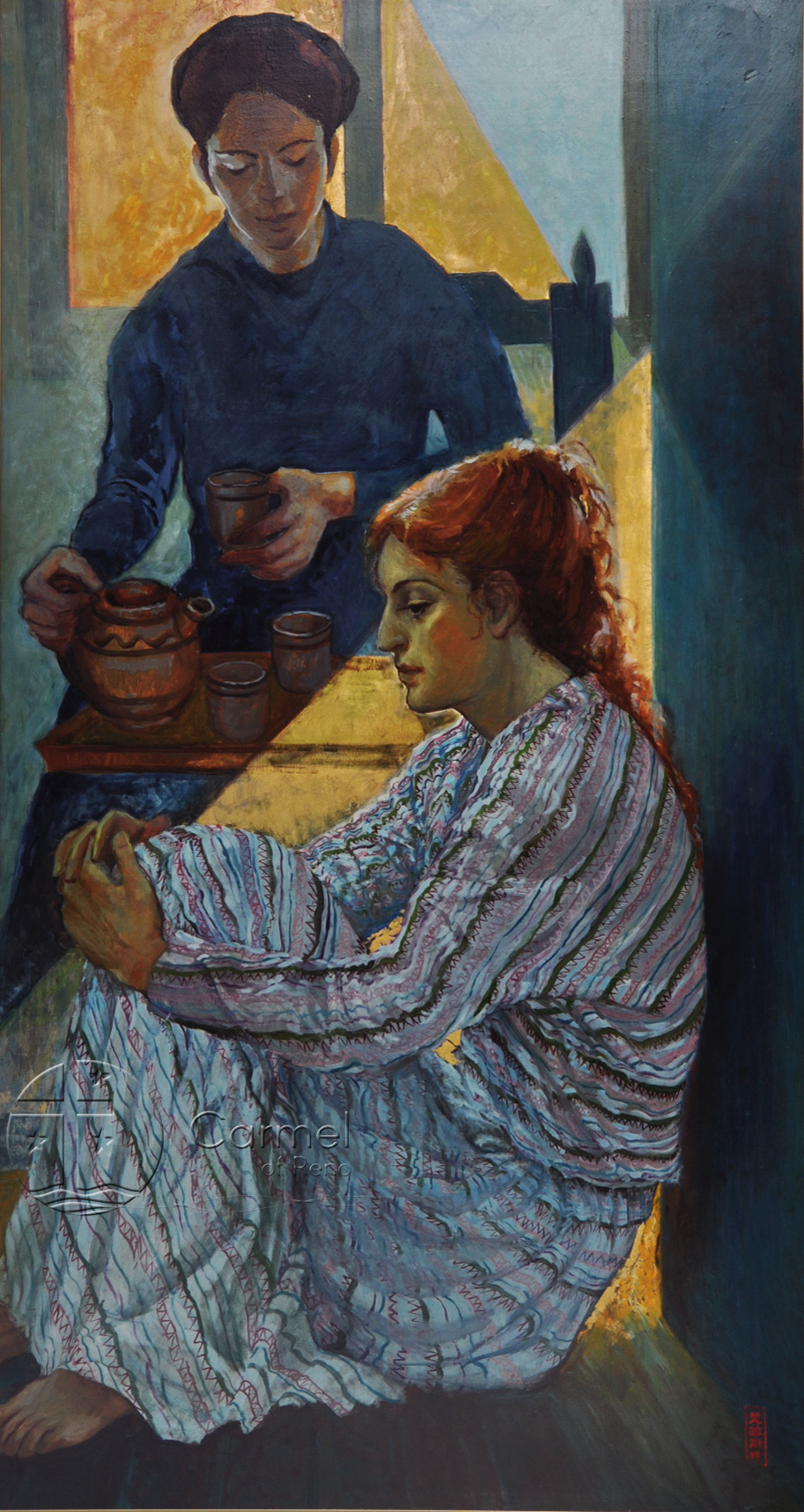 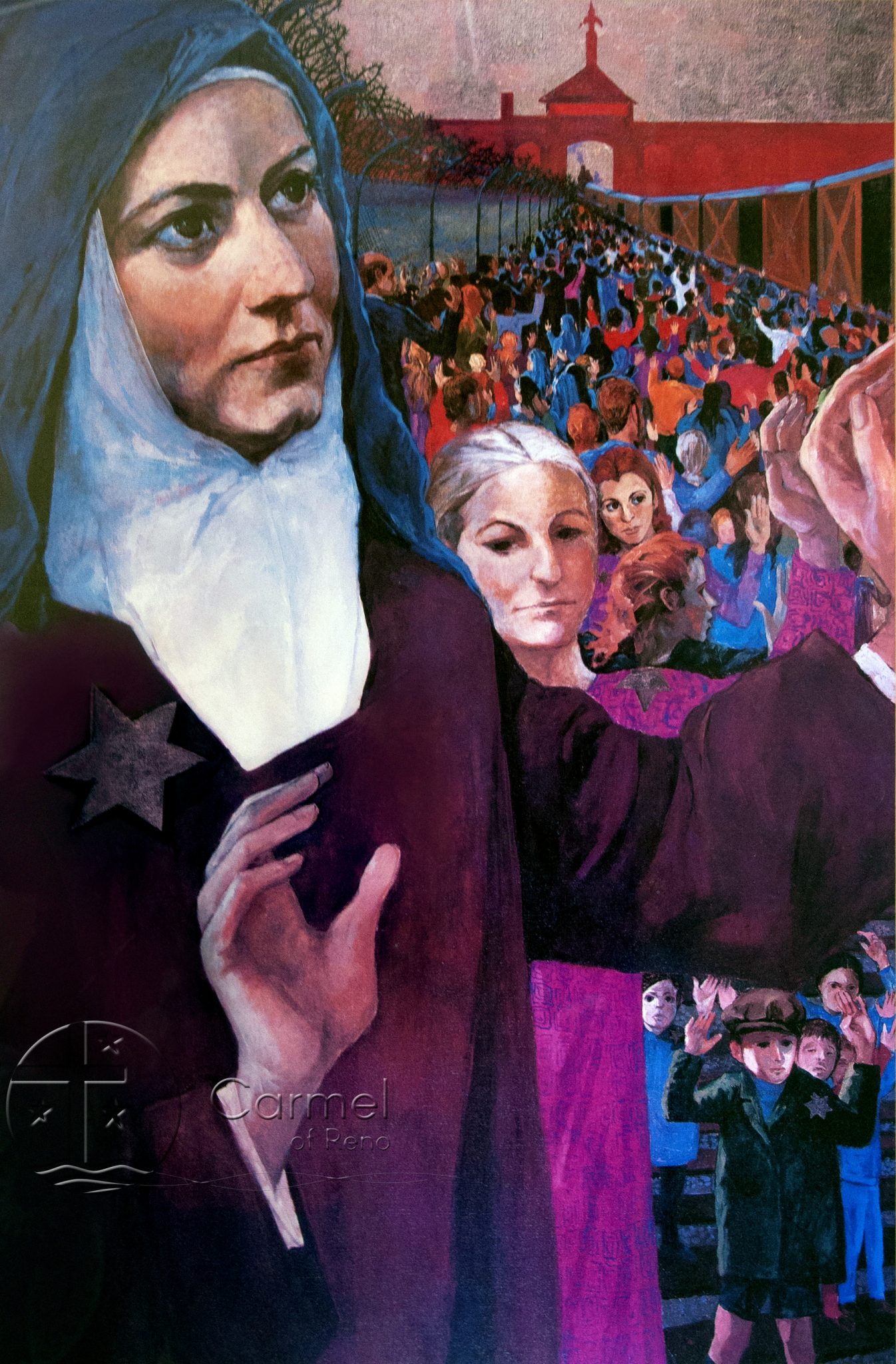 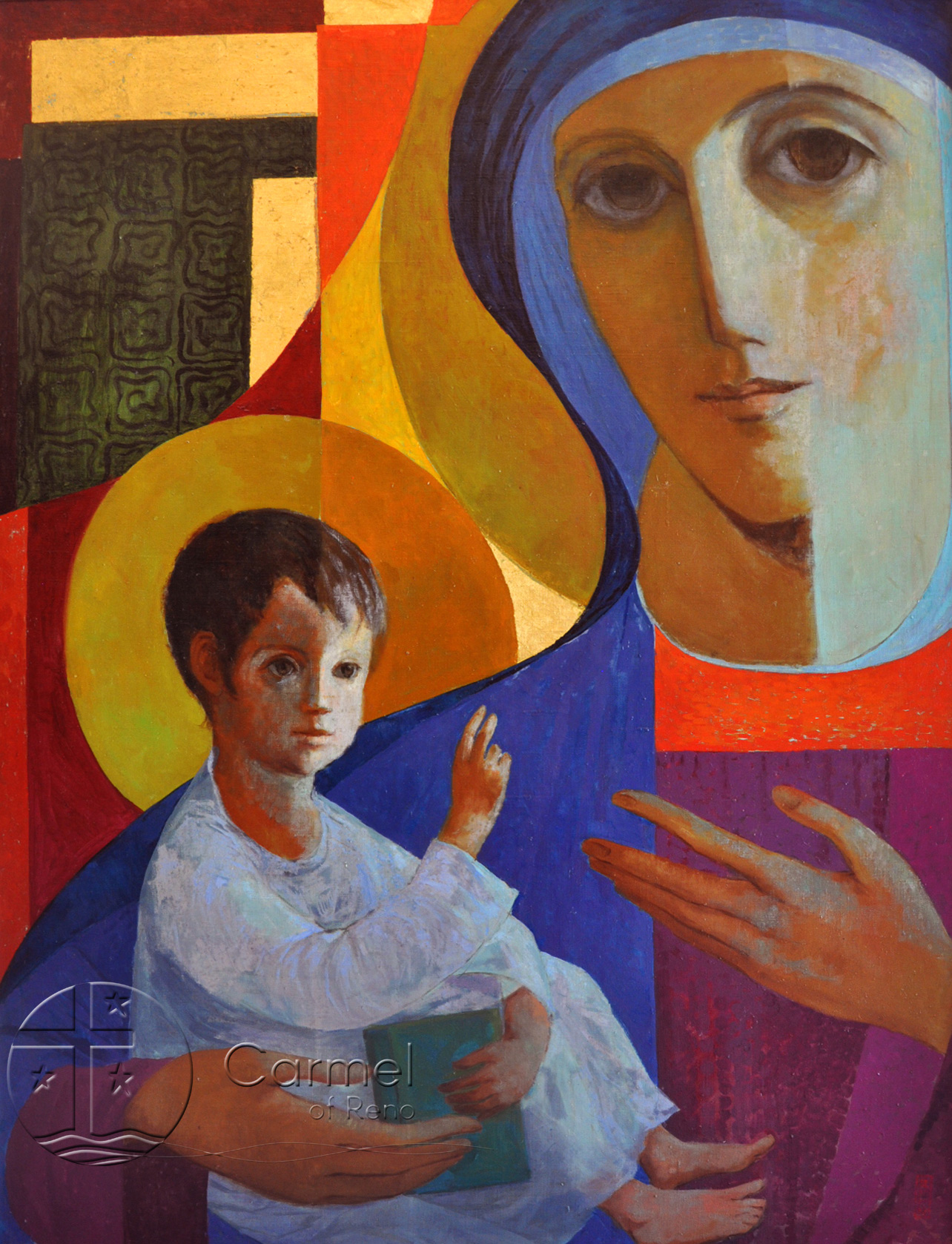 Would you like to own one of these works of art and support the sisters? Please visit our online Print Shop. You can order our cards.

Visit Our Print Shop
She came thinking that she would help for a few weeks but found instead the monastery and the contemplative (…from her journal March 1969) “The last lap of the flight to Reno was through a blizzard. The plane was bouncing wildly all the way-nothing but clouds and snow and wind outside. Suddenly a great hole opened in the clouds and streams of sunlight poured through the hole revealing the mountains, fresh with snow, the monastery on the hill, the little town below with dark clouds all around and two great rainbows. The feeling of a religious experience came over me…something had happened and I knew life would never be the same.” And it wasn’t. Marie-Celeste had found a home that breathed prayer, simplicity and the support to once again be an artist.

Again from her journal: “I was impressed by the atmosphere of prayer. It was coming from the persons and not from the things we had listed that added up to an atmosphere of prayer. There was great simplicity, openness to one another-openness to me the outsider. The attitude towards cloister, toward the daily routine, towards silence, towards clothing, work, leisure-all were different. It was not rules about these things controlling the sisters-it was just the other way around. It was the needs and goals of the sisters that determined the emphasis. And there was communication-open free and natural. There were no strict rules about silence, for example but there was more silence-one filled with a joyful spirit and seriousness about work. Times of prayer were deeply prayerful, times of recreation were filled with humor, and laughter and fun. In short, I experienced for the first time what I had been seeking and expecting when I left everything that I loved.”

Marie-Celeste was born a contemplative and in entering Carmel sought a ‘house’ in which to store her treasure. For thirty-five years she stored her treasure well in the Carmel of Our Lady of the Mountains.

As she has written in her last will and testament: “I hope that you will know how much I love each of you. My own devotion to you has been hard to put into words but every brush stoke was me speaking to you in paint.”

In her final years, she found herself in a very vulnerable state that was a new kind of brush stroke: a poem she composed captures the time.

When the day,
Reluctant to go into the past,
Looks back and sees night beckoning:
It puts forth its last power
In a sunset that drives
Fiery chariots across the sky;
To the sound of seagulls
And night birds,
it ritualizes an anointing
of this spent day as Sacrament.

Her spent day has left an evening sky streaked with beauty and ritualized all she suffered as Sacrament – her spent day – her final painting. “All the arts are mystical expressions. When you see them and ‘read’ them you take them into yourself to read and savor and you take away some universal value – planted in your heart – which you then replant so that the vine can bloom in other hearts. That’s why God gave us all the gifts we need as contemplatives and artists.”
(Marie-Celeste circa: 1999) 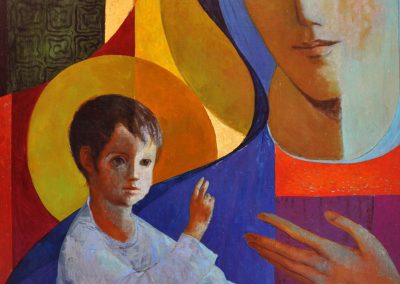 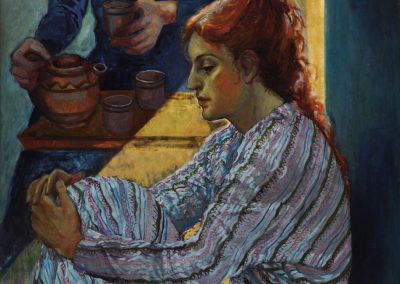 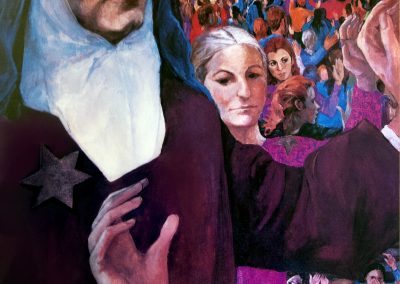 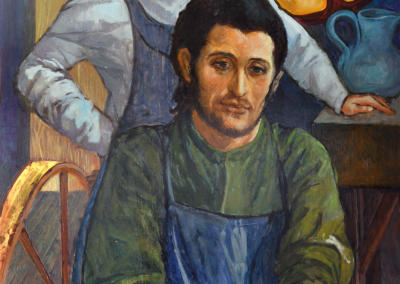 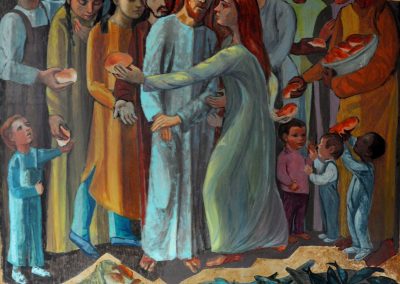 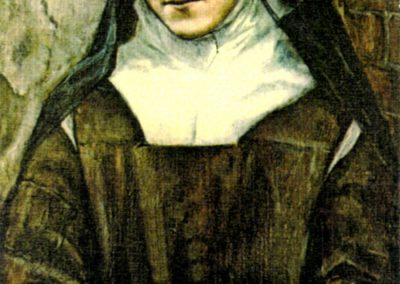 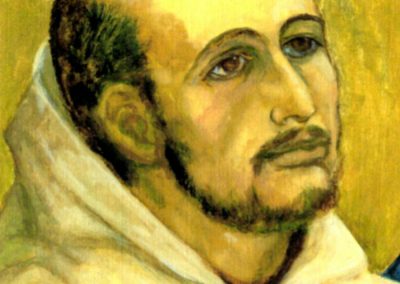 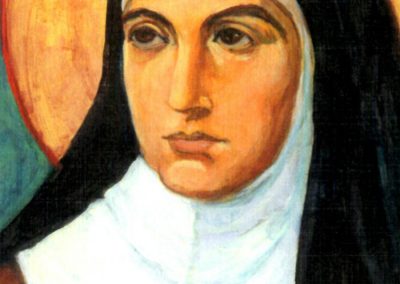 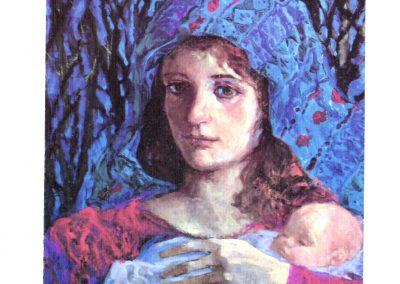 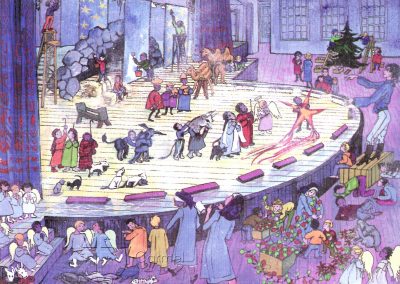 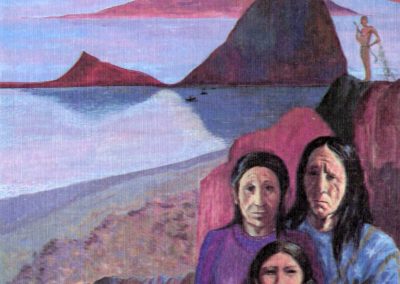 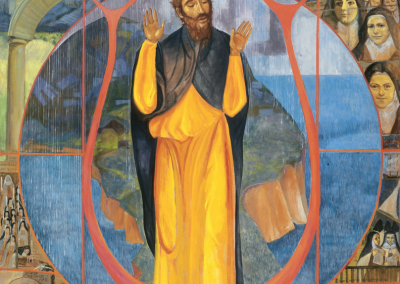